Get On Your Feet!

There are a variety of factors that contribute to individuals being overweight and obese.  For example, people take in more calories than they burn, people are overall much less active than they used to be, we eat more processed foods than ever before and many Americans spend most of their hours in the workplace sitting behind a desk.  It seems that most employees view their job and desk as an excuse to let their health go to the wayside. However, the CDC argues that because of the time that we spend in the workplace, it is actually a tremendous resource for support, partnership and encouragement.  Changing your lifestyle isn’t easy.  We spend on average 40 hours per week with our co-workers.  When we move forward in making our lifestyles more healthy, tapping into the resource of friends and co-workers can prove invaluable.

At First South Bank, we’ve recently seen several employees begin to shift toward a healthier lifestyle.   We were so impressed by one department’s efforts that we asked our own Sherry Langley to share her success story with us and how important the role of co-workers was in helping her achieve her goals.  Like any weight loss plan or healthy lifestyle change, it isn’t a destination you reach, it’s a journey you live.

It all began back in October of 2014 when we were asked to take a department picture.  We had all worn pink for Breast Cancer Awareness and we were asked to take pictures to share with other departments. If you know me, I prefer to be behind the camera. After seeing the picture, we as a department decided to make some changes and the next October we would take another picture and see if there was a difference.

Soon after this decision was made, I began walking either at work or at home in the afternoons. The holidays came, and naturally I fell off the diet wagon. Spring came and as a mother of two very busy and athletic children, it became too much to do after work. Not finding the time for myself to exercise, my co-worker, Jennifer Cobb, and I decided to start walking on our lunch hour. We would walk in the surrounding neighborhood for 45 minutes or so, being equivalent to about 3 miles. We then started implementing the Fitness Pal app on our phones. By logging in our food intake and exercise activity, we became much more accountable to our goals.  It wasn’t long before another co-worker, Jordan Everette,  joined in on the app, keeping track of her calorie intake as well. As a department, we would randomly do 30 second to 1 minute wall sits and planks. We made it fun. My weight started coming off, and I got excited. To fuel our bodies, we began drinking a lot of freshly made fruit smoothies and ate a lot of salads. Yes, I quickly became tired of salads every day. But, over time, portion control has played a huge factor in cutting our calorie intake.  Jordan decided to come up with a weekly meal plan. So, the three of us and other department members,  Allison El-Jabi and Paige Apple, would pick a day of the week and prepare lunch for the five of us. We really enjoyed participating in the meal plan! We could try new recipes and eat healthy at the same time.  There was never a meal that wasn’t good! I was always left wanting more and looking forward to the next day’s meal. I am a pizza fanatic and I have to say my absolute favorite meal was and is Jennifer’s pita pizza.  They are so good yet I feel a little bad anytime I eat one.

The journey so far has been long, yet so worth it!  As of now, I am down 37 lbs. I CAN CROSS MY LEGS! (It’s the little things that mean the most.)  I have had to get rid of some pants, but most are just a little more comfortable. Of course, I did HAVE to buy some new ones. Great excuse to shop! I always look forward to the “weigh in” texts on the weekend from the girls. I think we all have encouraged one another and they too have seen weight loss.  Jennifer has recently amped up our workout to include 3 minute intervals of running and core exercises. She has endured my grumbling while pushing me to do Jumping jacks and Bicycle crunches. Overall, I sleep better and feel great!  I still have a ways to go to meet my personal goal but I could not have lost what I have without the girls in this department encouraging me mentally and physically on a daily basis.

Take a look at Sherry’s before and after!  And, she’s still improving her health and losing weight.  We can’t wait to see the picture in October! 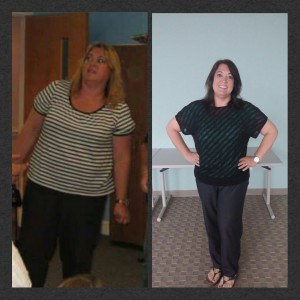 Take “can’t” out of your vocabulary!  Get together with your co-workers and see what a difference you can achieve in your life together!

To all of our customers heading out this morning looking to bag their limit — Happy Hunting! …

Our teams came together to support "Prayers for Porter". With monetary donations, team members could wear jeans to work today! #casualforacause …

Our teams came together to support "Prayers for Porter". With monetary donations, team members could wear jeans to work today! #casualforacause

All First South Bank branches will be closed on Monday, September 7 in observance of Labor Day. We will open at our regular operating hours on Tuesday, September 8. …